ToeJam & Earl is an early 1990s dungeon crawler for the Sega Genesis/MegaDrive. The game features two alien rappers, who have crash-landed on Earth and parodies 1980s urban culture. The game’s design was heavily influenced by the role-playing video game Rogue, and took from it such features as the random generation of levels and items. Played from a 2D-top-down perspective the game contains both single-player and two-player cooperative modes. The latter displays a single screen when both characters are near each other, but splits it apart when they are not. Playing the game with two players reveals dialogue and jokes between the characters not heard in the single player game. 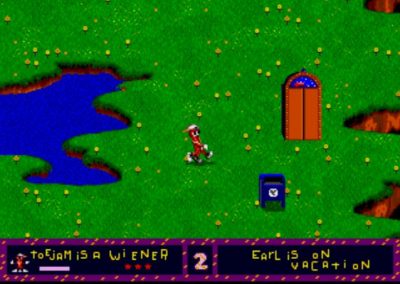