Super Mario World (known in Japan as Super Mario World: Super Mario Bros. 4) is a side-scrolling platformer developed by Nintendo EAD and published by Nintendo for the Super Nintendo Entertainment System on November 21, 1990 (in Japan), August 31, 1991 (in North America), and April 11, 1992 (in Europe). One of the launch titles of the SNES (and bundled with early systems in North America), Super Mario World is the fifth main game in the Super Mario series. (starring Nintendo’s mascot, Mario, and his brother, Luigi). The game follows both Mario brothers as they explore Dinosaur Land (known for its large amount of dinosaurs) to find and defeat the evil Koopa king Bowser (and his seven underlings, the Koopalings) while rescuing Princess Toadstool. Along with new abilities (such as the “Spin Jump”), a new power-up (the “Cape Feather”) and more obstacles, the game introduces dinosaur companions (known as Yoshi) that Mario and Luigi can ride. Yoshi, known for using their long tongues to snare and eat enemies, have become a fan-favorite among the series (giving them their own games and spin-offs, most notably this game’s prequel). 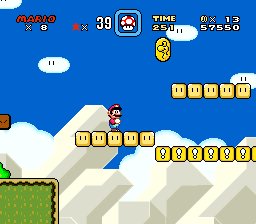