Super Fantasy Zone (スーパーファンタジーゾーン) is an entry in the Fantasy Zone series of games, and was initially released in 1992 for the Sega Mega Drive. Unlike previous outings, Super Fantasy Zone was handled entirely by Sunsoft (under license from Sega), who had previously brought Fantasy Zone and Fantasy Zone II to the Nintendo Famicom. For unknown reasons the game was not released in cartridge form in North America, but is currently unconfirmed as being a Sega Channel title. It eventually saw a more widespread release as part of the Wii’s Virtual Console service. 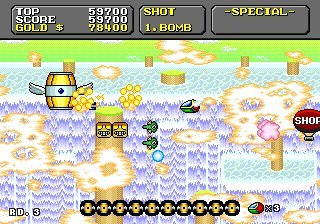