STREET FIGHTER II doesn’t try to fool you with a fancy name that will entice you to try it no, the gameplay itself is enough to convince even the most discriminating gamer that this is a stellar game. There are eight fighters to choose from, each with a unique fighting style and special attacks. But your opponents also have special attacks Ken’s Dragon Punch, Dhalsim’s Yoga Flame, Zangief’s pile driver, and Guile’s Sonic Boom so a good defense is just as important as a potent offense. Through all kinds of diverse and awesome-looking environments, you’ll go face-to-face against some of the meanest and nastiest street fighters this side of a honky tonk. Bring the arcade home and get ready to rumble with STREET FIGHTER II. 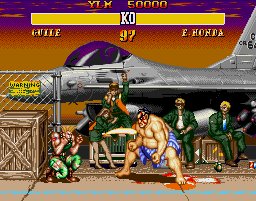