The gameplay for Ghouls ‘n Ghosts is similar to that of Ghosts ‘n Goblins. The player controls the knight Arthur, who must advance through a series of eerie levels and defeat a number of undead and demonic creatures in his quest to restore the souls stolen by Lucifer (Loki in the English-language Mega Drive and Sega Master System versions), including the soul of his lover, Princess Prin Prin. Along the way, Arthur can pick up a variety of weapons and armor to help him in his quest. While the core gameplay remains the same as its predecessor, the game now allows Arthur to fire directly upward and directly downward while in mid air. By jumping in certain spots, players can cause a treasure chest to erupt from the ground. By firing his weapon at the chest, players may uncover new weapons, gold armor or an evil magician that changes Arthur into an elderly man or a helpless duck. The gold armor allows players to charge up the weapon to release a powerful magical attack. Each weapon has its own special attack. There are five levels and Lucifer’s chamber at the end, considered a sixth level in itself. To defeat the game, Arthur must complete level 1 to 5 twice. Upon completing level’s 1 to 5 the first time, Arthur is taken back to level 1 again but this time a special weapon appears during the game. To enter Lucifer’s chamber the player must have this special weapon equipped and defeat the penultimate boss. 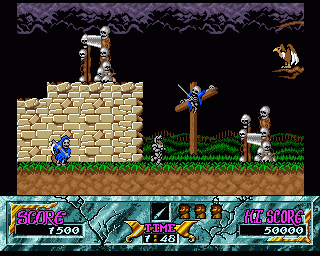