The arcade version of the game is essentially an improved version of the original title. The biggest change in the game’s controls are in the replacement of the original’s punch and kick buttons with two directional-based attack buttons (Left Attack and Right Attack) similar to Renegade. Pressing the attack button of the player’s current direction will do a standard series of punches, while pressing the opposite attack button will perform a back kick. A few new moves are added as well, including a Hurricane Kick. Like in the original game, the arcade version of Double Dragon II is divided into four missions: a heliport, a lumber storehouse, a wheat field, and the new hideout of the boss. Each stage has its own boss character with his own theme. After defeating Willy (the final boss from the original game) in the fourth stage, the player will confront a double of their own character for the game’s final battle. If two players reach the end together, then both will each to have to face their own clone for the final battle. 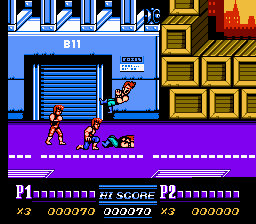