Donkey Kong Country is a side scrolling platformer by British developers Rareware in 1994. It featured revolutionary pre-rendered 3D graphics that give the game a very unique look compared to most other games on consoles at the time. The two playable characters featured in the game are the titular character, Donkey Kong and his nephew, Diddy Kong. Together the two swing, climb, jump, swim, cartwheel, ride animals, and blast out of barrels on their way to recover their stolen bannanas from the evil King K. Rool and his Kremling army. The adventure takes you through a variety of different environments and levels that continually change up gameplay. Donkey Kong Country also provides plenty of opportunities for exploration with almost every level having a multitude of collectible, shortcuts, and hidden bonus areas. 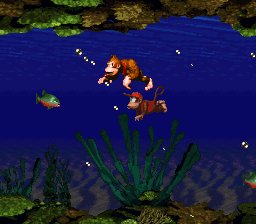